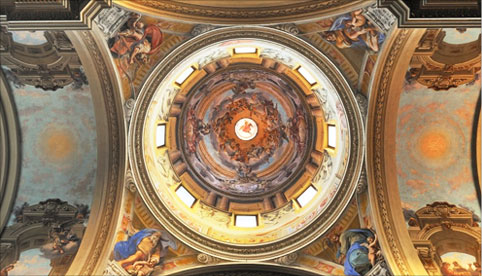 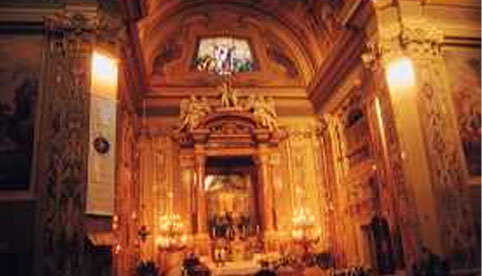 Spezzano Castle was built during the Middle Ages; more specifically, the trench, the lift bridge and the battailed walls date back to the 14th/15th century. The presence of a pentagonal tower suggests that Spezzano Castle was also used as a defensive position.
In 1529, the Pio di Carpi family, rulers of the city of Carpi, converted the Castle into a stately home. Marco Pio III commissioned a unique pictorial series to celebrate the economic power of his family through an exhibition of a real estate cadastre with 57 reproduced views of the landscape with towers, castles and villages; that pictorial series can currently be admired inside the widest hall of Spezzano Castle. Several chambers of the noble quarters and the ground floor are further embellished with frescos, pictorial series and panelled ceilings decorated with sixteenth-century polychrome tiles.
In 1982, Fiorano municipal administration acquired Spezzano Castle and the historical park surrounding it. The Castle became the permanent seat for the Ceramics Museum, while the pentagonal tower currently hosts the Municipal Vinegar Works. In addition, Spezzano Castle frequently holds conferences and archeology and contemporary ceramics temporary exhibitions. The Reinassance colonnaded courtyard, the “Sala delle Vedute” and the “Galleria delle Battaglie” are especially exquisite. The Ceramics Museum is both a technological and archeological, as well as historical-artistic, museum. It illustrates ceramics production techniques from the Neolithic to our time, and is divided into three sections: an historical section, a contemporary one and a contemporary collection. The museum offers a clay workshop too.

When the black plague spared Fiorano, the citizens thanked God by building the Sanctuary of Beata Vergine. The architect chosen for the planning was Bartolomeo Avanzini, and the construction began in 1634. The Sanctuary of Beata Vergine is 37 meters tall and its structure is greek-cross plan. Behind the altar stands a set of stairs where several ex-voto are displayed; those stairs lead to the wall painting depicting Virgin Mary and child. The wall painting dates back to the 15th century. Inside the Sanctuary, seventeenth-century decorations by Sigismondo Caula and Tommaso Costa, and nineteenth/twentieth century decorations by Adeodato Malatesta, Gioseppe Mazzoni and Alberto Artioli can be enjoyed.In 1989, the Sanctuary was upgraded to a Basilica by papal decree, gaining a Basilica‘s rights and privileges. The Basilica hosts a permanent ex-voto exhibition dedicated to the Blessed Virgin.The position of the Basilica allows visitors to enjoy a pleasant view of Fiorano and the neighboring plains.

Natural Reserve of Salse of Nirano

The Natural Reserve of Salse of Nirano is an enjoyable naturale site 1,5 kilometers from Spezzano Castle.
The Reserve extendes over a wide calanque area, and its main feature are the Salse, a peculiar geological phenomenon. The Salse are small mud cones originated from hydrocarbons and cold muds; those small cones release gas and bituminous substances.
Several avenues for exploration make the Reserve comfortable and easy to explore.

In 1598, the House of Este lost the city of Ferrara. Francesco I D’Este, Duke of Modena, didn’t lose his heart and worked hard to restore the House‘s dignity. In 1634, he began the conversion of the Palazzo Ducale of Sassuolo from castle to “Delizia”, the official holiday resort of House Este. Bartolomeo Avanzino, the ducal architect, was appointed with the task. The Palazzo Ducale of Sassuolo is a real gem in the landscape of northern Italy’s baroque culture. The Palace has been frescoed by Jean Buolanger, the House Estense court painter, and by several major artists, such as the “quadraturisti” painters Michele Colonna and Agostino Militelli, the interior painters Luca Colombi and Lattanzio Maschio, and the famous stylist Gaspare Vigarani. Thanks to the restoration work, it is currently possible to visit the noble quarters, or “piano nobile”. The area is beautifully decorated with sculptures and paintings. The noble quarters are accessible from the “Scalone d’Onore” and include 28 chambers once used by the ruling family of Modena. Amongst those chambers are included the Gallery of Bacchus, or “Galleria di Bacco”, the Duke’s Apartment, the Hall of the Guards, the stuccoed Apartment, the Duchess’ Apartment, and a section of the the apartment of Orlando. The most recent restoration works revealed extraordinary details about the Palazzo Ducale‘s outlook prior its baroque conversion; before Francesco I D’Este, the building belonged to Borso I D’Este, Ercole I D’Este and the Pio di Savoia family. In the ground floor is the Chancellery room, with the paintings by Domenico Carnevali, the Giants’ apartments, with its wooden panelled ceilings decorated with emblems of the Este family, its sixteenth-century paintings depicting heraldic shields and its seventeenth-century decorations by Sebastiano Sansoni and Francesco Mattei.

Museum dedicated to the car manufacturer symbolized by the Prancing Horse.